tonite, was my booger's last football game. the first one i made it to, tho. SOMEONE didn't send me the schedule!! but i got to see some old family friends of S1 and BIL1. one of the family friends is a little girl who used to have a giant crush on booger. he was friends with her brother and more or less treated her like a little sister. the crush soon ended after booger was invited on vacation with them. when they got back, she said she "couldn't stand him". he was mean to her, obnoxious, and farted all the time. right. in. front. of. her. eeewwwww. being as she's all growed up now and a very cute cheerleader, i'd say booger missed his chance. 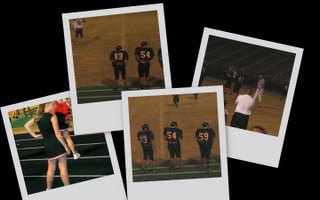 booger also scored TWO touchdowns in the first half of the game! he rocks! he plays both offense and defense. S1 says that alot of the players do that. i'm guessing it's because they don't have enough players. when i left, at half time, the score was something ridiculous like 42-10. if the other team even had that. i know we had 42.

i had to take off to get provisions for the rally this weekend. i think we're gonna grill some hot dogs on the roof. HM's also making a brisket and BA (one of his buddies from austin) is coming down. i really like BA. he's pretty much the only one i'll trust HM to run off with. i don't know why. he's probably the worst one, he just hides it well. sistah sweet cheeks is supposed to make it down as well. i hope she makes it.

p.s. we're going to check out another house tomorrow. wish us luck as sylvia will be coming with, to meet mamalane and papatom.